Casting Into The Wind

Today's tip is about casting into the wind. To avoid backlashing and maintain distance into the wind the actual speed of the rod needs to increase as well as the force that the lure is moving into the wind. Try to avoid thinking of casting harder but rather generating more speed during the cast.

Try and think of the movement during a cast as building up energy to push the lure forward. The more kinetic energy generated during the movement, the more the lure will have when released.


The best way to get better at this is going to the middle of the lake or an open area and casting into the wind. Not trying to catch fish, but perfecting the cast. Pay attention to each detail during the cast and try to make improvements. A GoPro would be good for this.

Have fun and hope this helps,
Steve
http://www.floridabassadventures.com
By Steve Boyd at October 31, 2016 No comments:

The Myth of Pattern Fishing 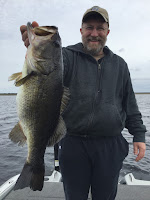 In every magazine you read there will be at least one article dedicated to identifying a pattern on a body of water. It's a popular topic that anglers have searched for as if searching for the Holy Grail.

Much like Sasquatch there are conversations among anglers about how so and so was on a particular pattern and how it was how they won the tournament.

And just like Sasquatch there is little detail, no video and every story gets better with who is telling the story.

Like many problems in bass fishing there is poor use of terminology that inherently weakens those using it. Pattern fishing is up there as one of the worst as being vague, deceptive and detrimental.
To be more specific would broaden and anglers mind and open up the gateway to more possibilities.
For example, there are Seasonal Patterns that exist that can be tracked very easily on a body of water. But of one simply says "pattern" and tries to relate it to a "dock pattern", "bridge pattern" or "brush pattern" they are missing the specific elements that come with a seasonal pattern.
Angers are pre fishing for weeks looking to get on a pattern and never once stop and search for the biological behavior that happens during a seasonal pattern.

Seasonal patterns place fish in very specific areas on a lake and only daily influences dictate how much they move from one day to the next.

I could literally write an entire book just on this subject so for the sake of a tip, think In these terms.
If you are traveling 60 miles in a day to fish a pattern just to find the similar things needed to meet pattern criteria think about the fish that aren't doing what you are doing.

Instead seek out the specifics of biological behavior based on the season and you'll find yourself spending more time catching rather than driving.
Have fun!
http://www.floridabassadventures.com